The Admiral is now finished and on display, fully functional at age 60+.

When this set was built, television broadcasts had been available for only three years.
Less than 100 stations were on the air, and only about 3% of U.S. homes were equipped with receivers.

NBC's "Meet the Press" is the longest running series
ever broadcast, being continuously produced since 1947,
just a few months before this Admiral was manufactured.
Here's a screen shot from 2004. 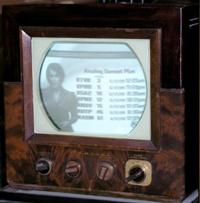 This TV set spanned nearly the entire existence
of analog NTSC broadcasting in the USA.
Here it is displaying the off-air signal on June 12,2009
- the day most analog stations "pulled the plug".