Here are some unusual examples of calculator history from my collection.
Some of these are for sale or trade, as noted.
As of this date most have in fact been traded! More to come when time permits... 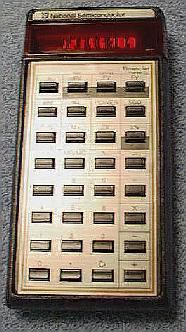 These were the top-of-the line from National in 1975, a complementary pair of handhelds in nearly-identical cases...I also have another Mathematician in a white case with the "Novus" logo.

The Mathematician is an early LED scientific calculator, one of the few non-HP units to employ RPN logic.

The Financier uses a combination of adding-machine and algebraic entry and has a number of
time-value-of-money functions built in.

I would prefer to trade these for a classic HP, particularly an HP-70, but will consider cash offers. 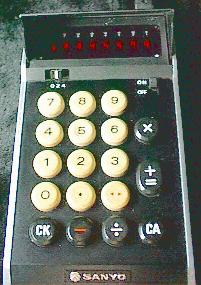 Unusual design with a flip-up shade on the display. Internal NiCds plus original AC adapter.
Works, but some display segments don't light up.  (TRADED) 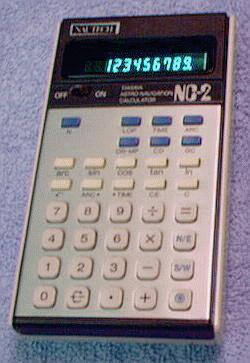 A scientific calculator with vacuum-flourescent display which has special function keys for navigation:
LOP, Time, ARC, DR-MP, CD, & GC .  Quick reference chart on back of unit. Comes in a hinged,
fitted wooden case with some typed operating notes inside. Obtained from USAF surplus sale.

(TRADED for an HP model) 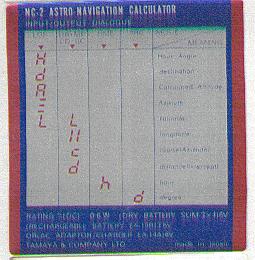 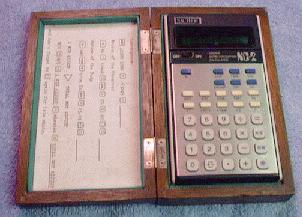 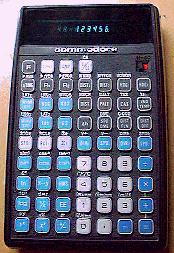 An incredible 60 keys cover the front of this wide-body calculator.
Full scientific plus special air-navigation functions.
Vacuum flourescent display, internal NiCd battery.
This was a clean example and working but I traded it away
without using it because I didn't have the manual... but recently
fellow collector Katie Wasserman was kind enough to send me a PDF
of the manual. If you need a copy email me and I'll make it available. 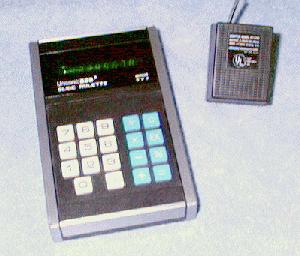 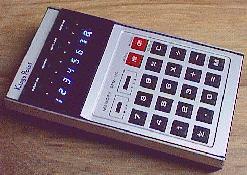 Display is eight individual small vacuum-flourescent tubes.
Four-function plus memory and auto-constant, and an odd
combination of adding-machine and arithmetic logic. (TRADED)

One of the earliest LED pocket calculators.
Apparently made by Casio. [Not for Sale/Trade]

An attractively-designed four function model with 6-digit vacuum flourescent display.
It can calculate to 12 digits, though: the six most significant are shown, but pressing the > key
shows the last six. Also unusual - the zero is small, "o" instead of "0". 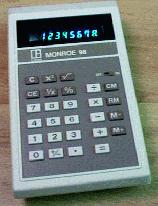 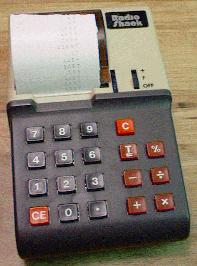 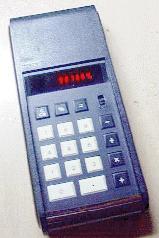 Not a terribly useful calculator, really...
You have to supply the answer, it tells you if you're right with red/green eyes. [SOLD] 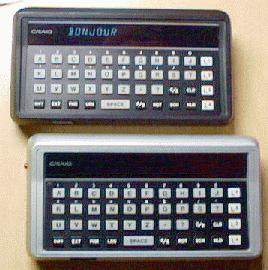 OK, not really calculators at all, but handheld bilingual dictionaries. Translates words or
phrases into various languages based on the ROM modules installed. The black one
has English/ Spanish / French while the silver one has English/ Spanish/ Phonetic.
Green flourescent display. Eats batteries fast!